For someone who lives so much in her head, I do not have the habit to reflect officially. I do not keep a journal; I have tried a million times, but it is not something I can stick with. I do, however, keep track of my sewing projects as a way to measure progress, so I decided to give this year-in-review thing a try. Even though this is meant to be an account of my year in sewing, I feel I cannot avoid discussing some events that have shaped my sewing journey in 2018. 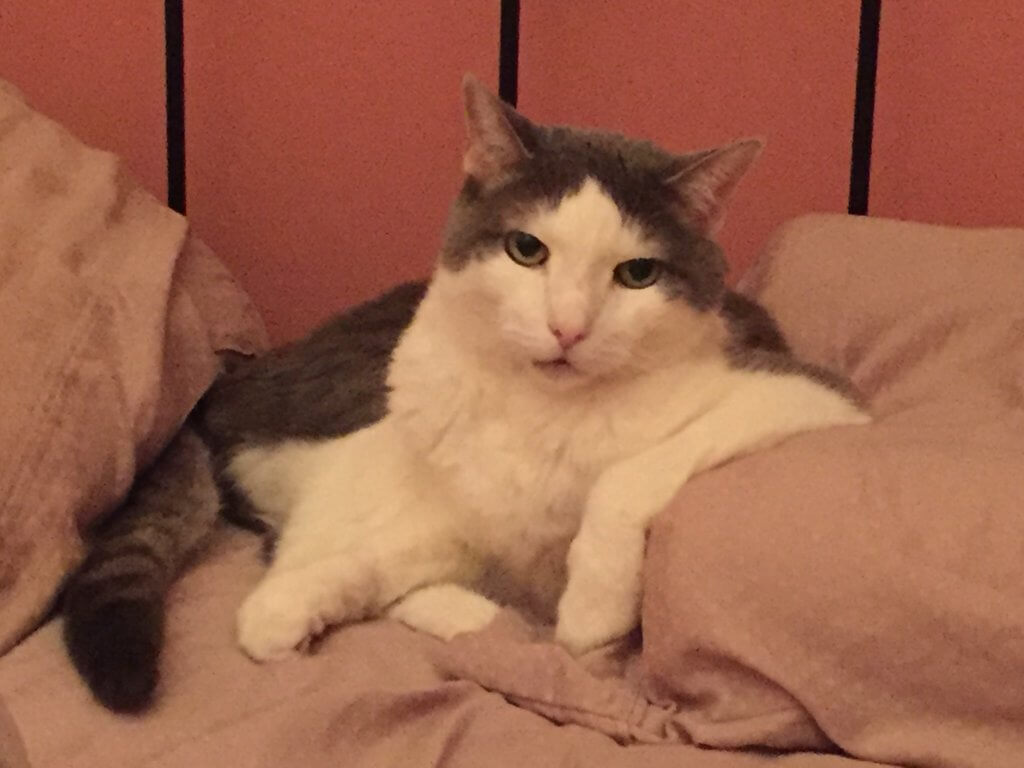 The year started really, REALLY sucky. Our beloved kitty Athen was diagnosed with small-cell lymphoma the previous July and had been doing well on chemo when his kidneys started to fail. He spent a good part of December in the hospital, and by mid-January, it was clear that he was ready to move on. On January 14, 2018, we said goodbye to our kitty baby. I still cry when I think of him and his beautiful green eyes. 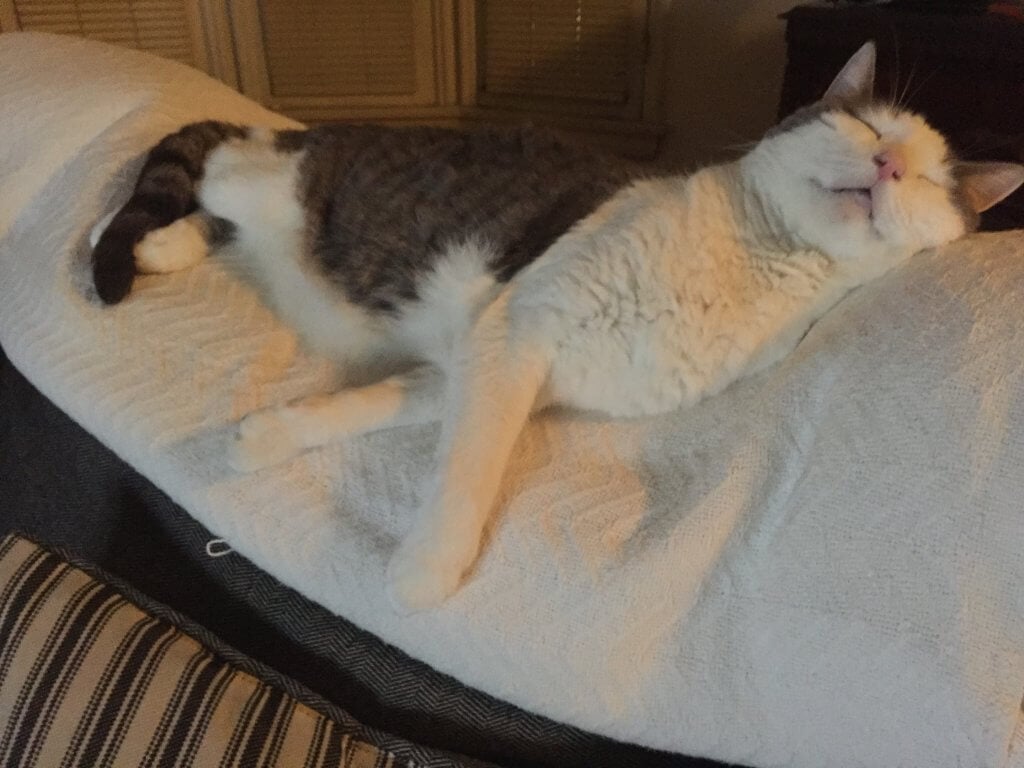 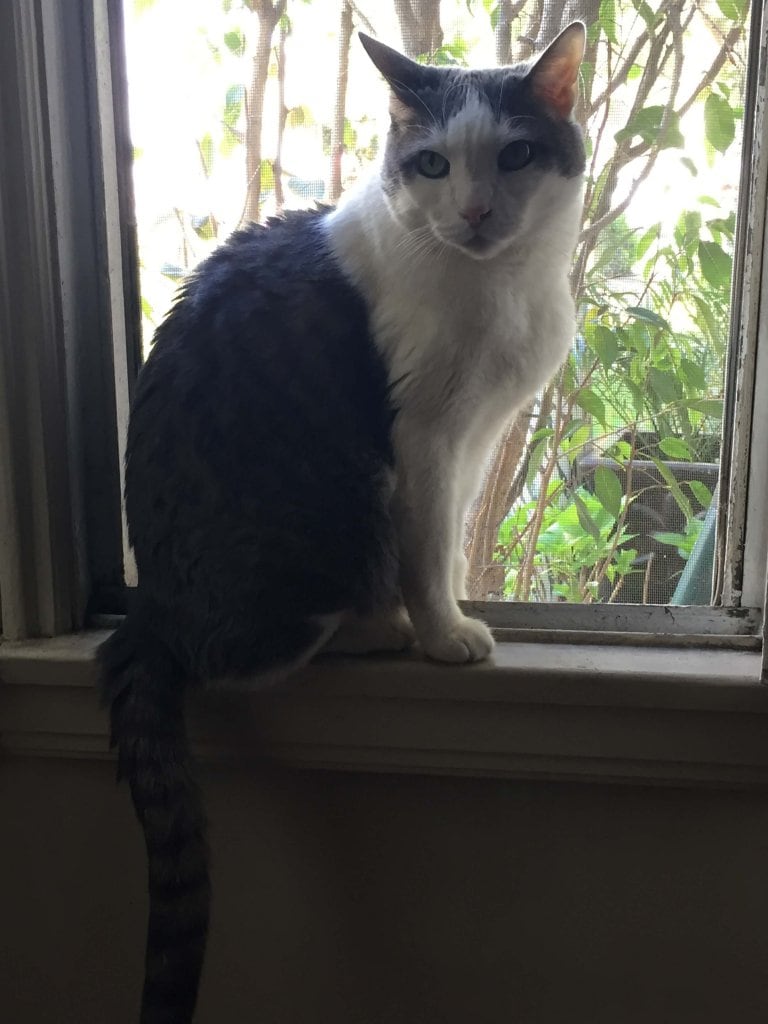 Such a beautiful baby

Once Athen got sick, my priority became to keep my cat alive and happy. There were vet visits and medications and obsessively observing every breath he took. I was not in a space conducive to sewing. Things got worse when Athen died. I was emotionally exhausted. I was beat. Many hours were spent numbing the mind with TV watching. There was a lot of Law and Order: SVU. My brain needed the rest.

A Year of Sewing Firsts

Then in March, I remembered a beautiful piece of crepe de chine with a black-and-white cat print I had purchased at The (now defunct) Fabric Store LA. It just felt right that the first project of the year should be a cat print garment. I used the Mimi Blouse pattern by Tilly and the Buttons, and the Love Cats Blouse was born. This was the first time I tackled a blouse with buttons. I have avoided sewing buttonholes for a long, long time. I dreaded the possibility of finishing a garment and then destroying it by not spacing the buttons correctly or ripping through the fabric as I tried to cut a buttonhole open. 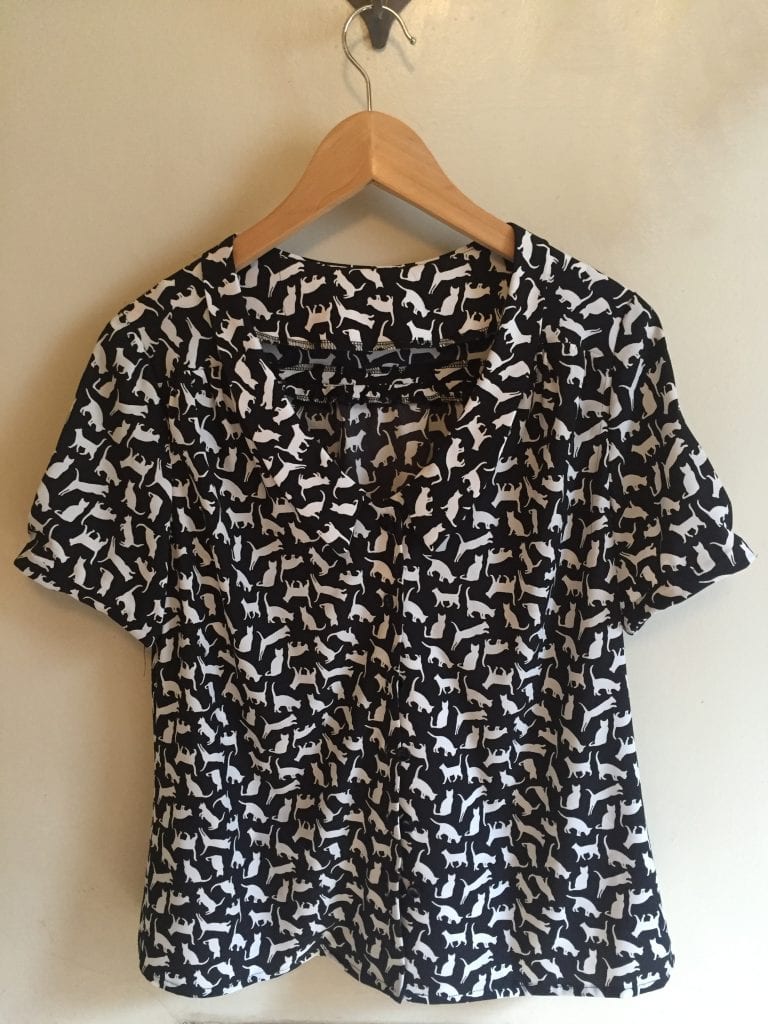 It felt good to conquer this fear. I felt so empowered that I embraced another buttonhole challenge and made Simplicity 1941 in a Halloween cotton print from Joann. I had planned to make this blouse a few years ago and even made a muslin, but the buttons kept me away. No more! The blouse looks great, but I still need to play with the fit. Now that the buttonhole fear is no longer a deterrent, I see many more blouses in my future. 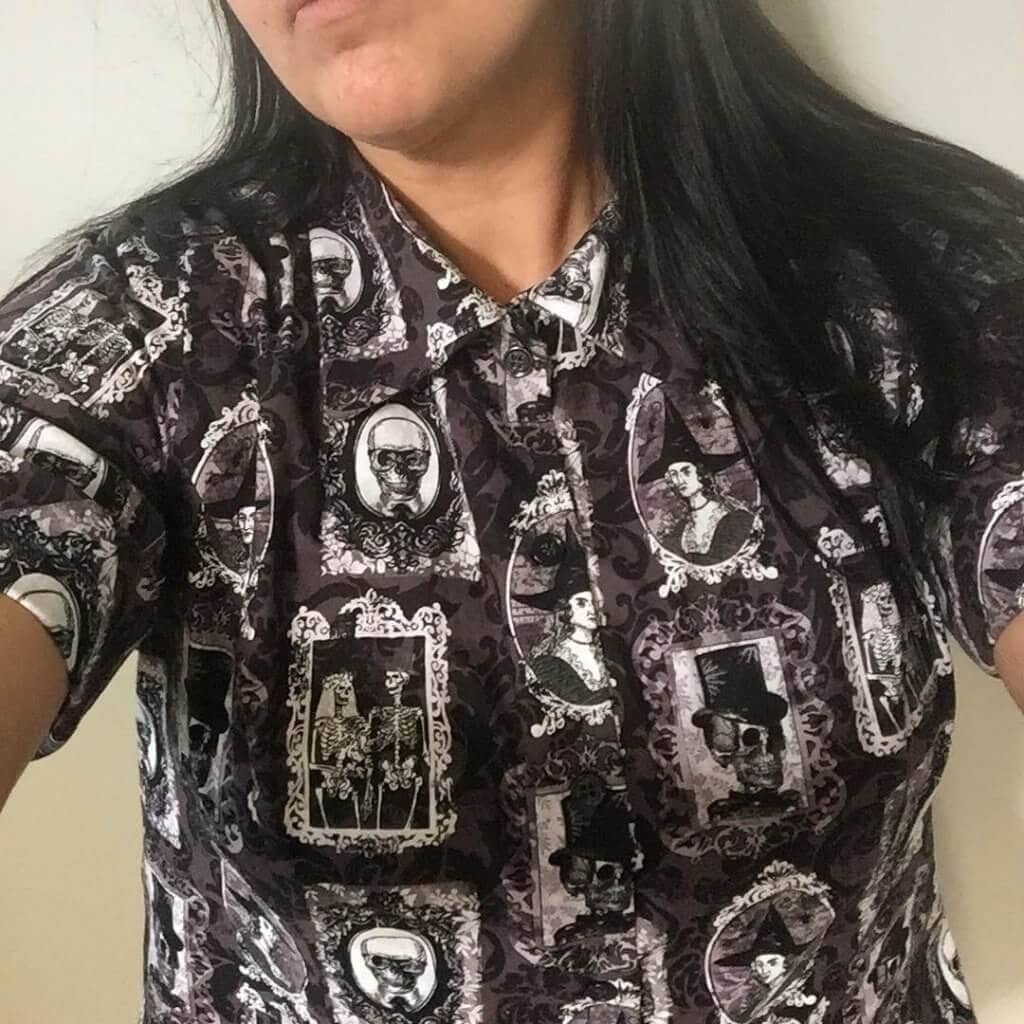 I am a goth. I know how to sew. One would think that I would be all over making my own corsets. But no. Once again, the fear of messing up kept me from trying to sew corsets. First, getting the fit right seemed just too much to make sewing a corset fun. Then, the specialized gear (busk, boning, grommets) was not readily available, so I would have to plan more than the usual. And all the layers and channels and topstitching… My brain would get overwhelmed just thinking about it. 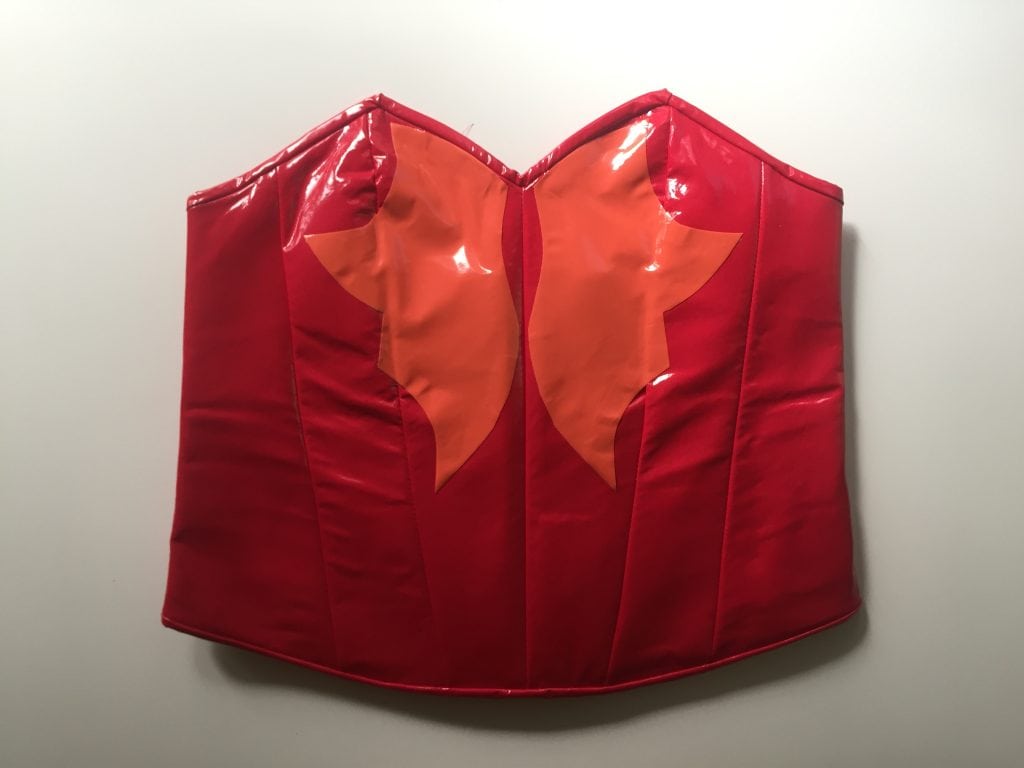 Until I settled on this year’s Halloween costume, Catra, She-Ra’s villain and all-around awesome cat woman. As I tried to figure out how to get this done, it became clear that I would have to make some sort of corset. I chose Simplicity 5006 because it did not have a front busk… which meant that I had to count on my lovely boyfriend to get me in and out of it. I found the most amazing corset making store locally (on the way from my place to Joann!), Richard The Thread, and loaded up on supplies. That corset got made. 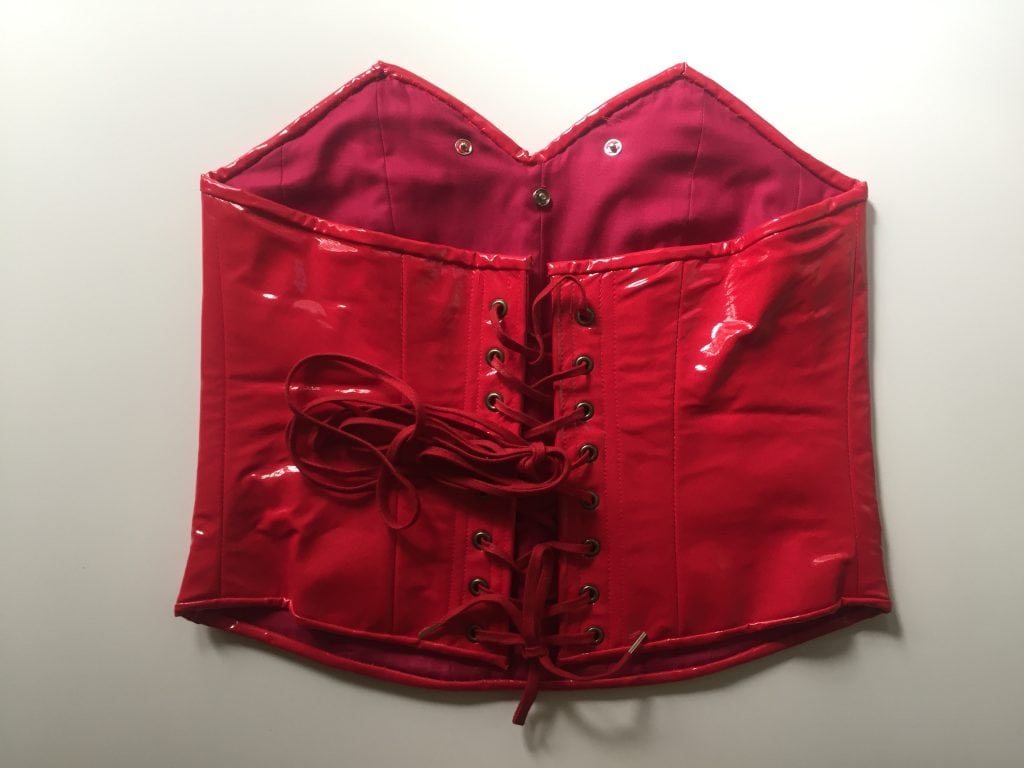 Making a corset was so much easier than I expected. It was time-consuming—especially because I ended up with three layers of fabric and twice as much boning as the original pattern. I was too conservative with the fit, and the corset ended up not squeezing the life out of me. But I learned how to sew channels, measure for boning, insert the grommets, and lace the corset properly. My next corset is already planned—Truly Victorian 110. Corset making no longer scares me.

I made my first “serious grown-up person” garment this year, the Morris Blazer by Grainline Studio. I wanted to slowly get into sewing outwear, but I needed a project that would not be overwhelming. The Morris was the perfect choice. Because it is meant for knit fabrics, the pattern is more forgiving when it comes to fit issues. The only adjustment I made was to add length to the sleeves. The pattern instructions are amazing, but the sew-along really makes sewing the Morris a pleasure. The blazer is so classy and cool, I know I will be using it for many years to come. 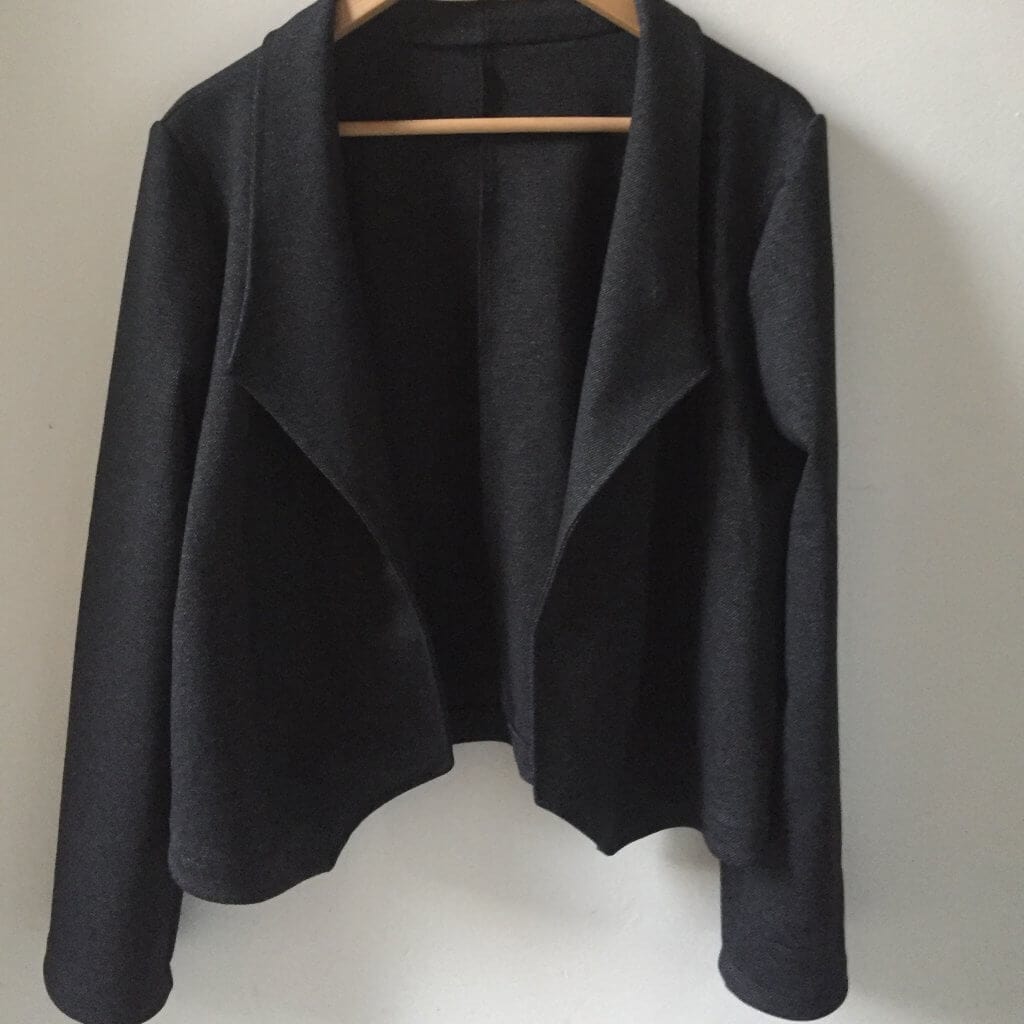 The Morris Blazer in Tweed Ponte

I often struggle with bringing my goth side into my everyday life. This is why I started SewGoth—to give me the freedom and permission to embrace my dark half and bring it into the light. To quote Al Jourgensen, “to me every day is Halloween.” For too long, I curbed my love of all things macabre because I wanted to separate my private (goth) life from my public (school) life. But why? Why should I pretend to be something I am not for the benefit of others? To spare ignorant people from getting schooled every time they joke that I wear black too often? Or that my love of Halloween must mean that I am a witch or devil worshipper? I am done. 2018 liberated me to be what I have always been—a proud goth. 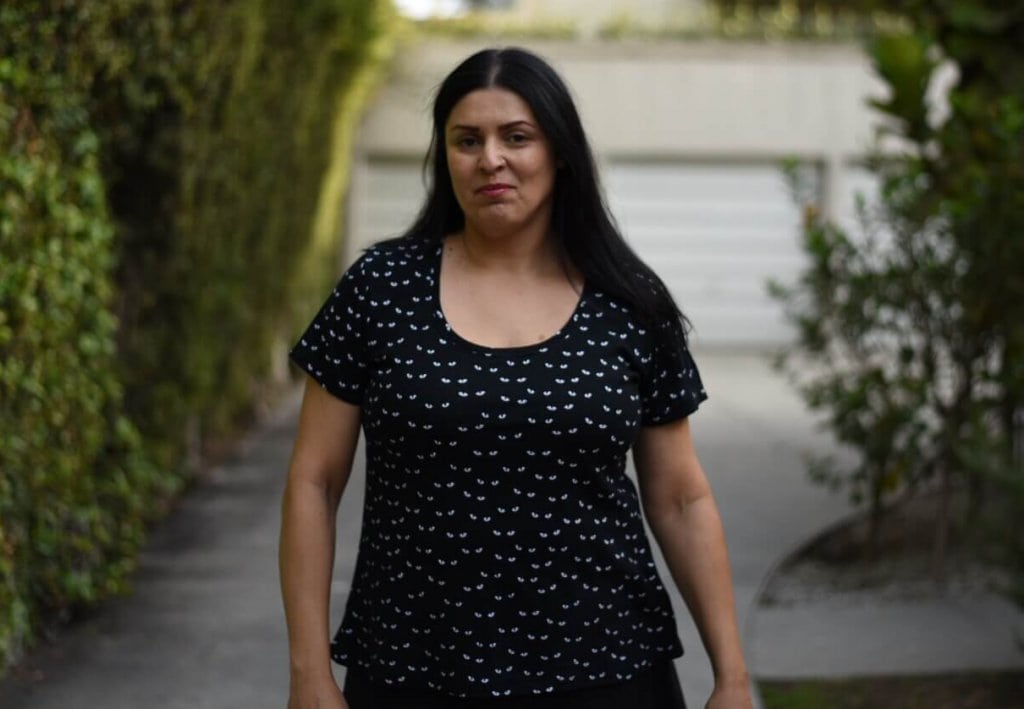 All Eyes on Me Plantain 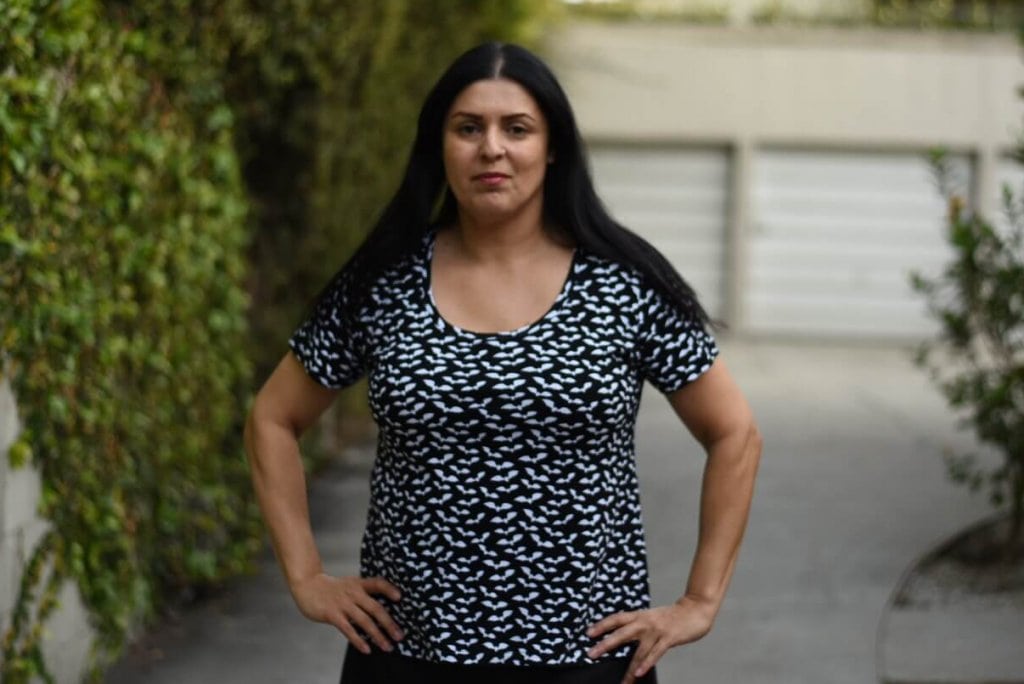 Many of my makes this year celebrate my love of all things goth. I love spooky prints, so I took advantage of amazing sales at Joann and bought fabric for two Plaintains, the Batty T-Shirt and the All-Eyes-On-You T-Shirt. An amazing glow-in-the-dark skeleton print became the Boneyard Party Skirt. My favorite skirt patterns, Delphine and Ginger, became basic staples of my goth wardrobe in plain black and steampunk brown. I also celebrated my deep love of cats in the many cat print garments, like the Love Cats Blouse and the Achilles Dress. A wink to Lovecraft came in the Paul Dress, a Plaintain hack. And an end-of-year homage to my 90s goth self materialized in the velvet glory of the Frosting Joni Dress. 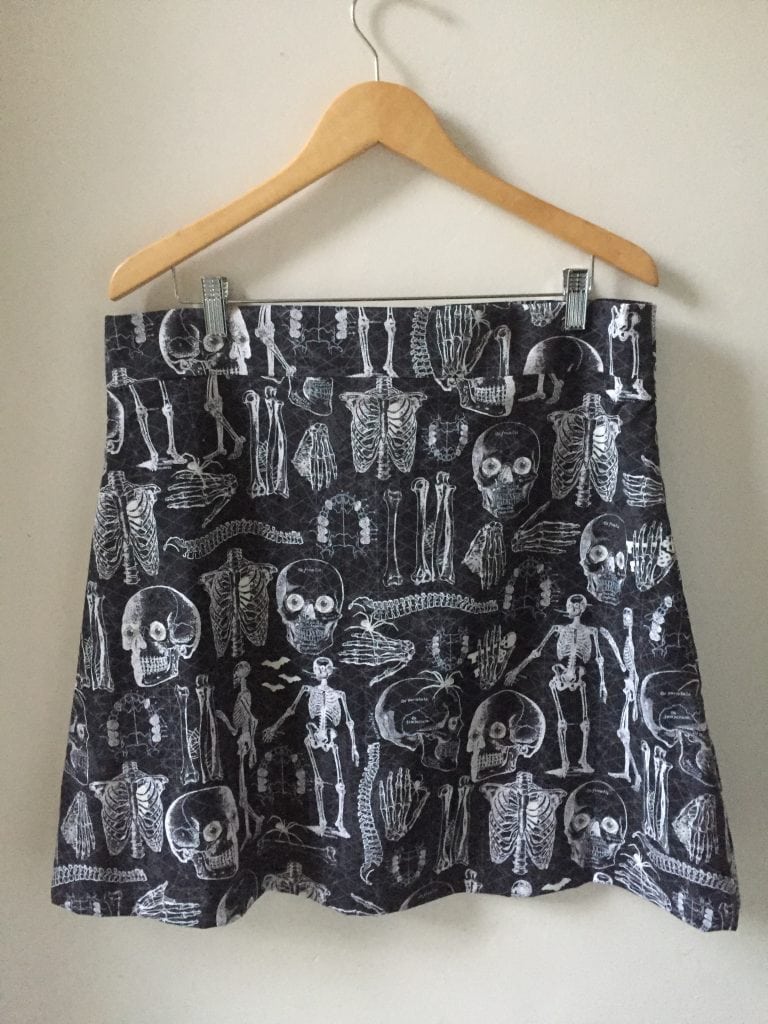 Looking into the Future

Starting an Instagram account to document my sewing journey has been the most important step to motivate me this year. I met amazing sewists from all over the world, and this sense of community has inspired me to really challenge myself. I am letting go of the fear of failure that is so often paralyzing, and I am trying to be better at taking risks. I want to sew a couple of corsets and my very first tailored coat. I want to continue to gothify my wardrobe and my life. I want to continue to work on accepting me as I am—a long road that has seen wins as well as misses.

And, hopefully, there is another kitty in my future. Because life is just kinda empty without a kitty. 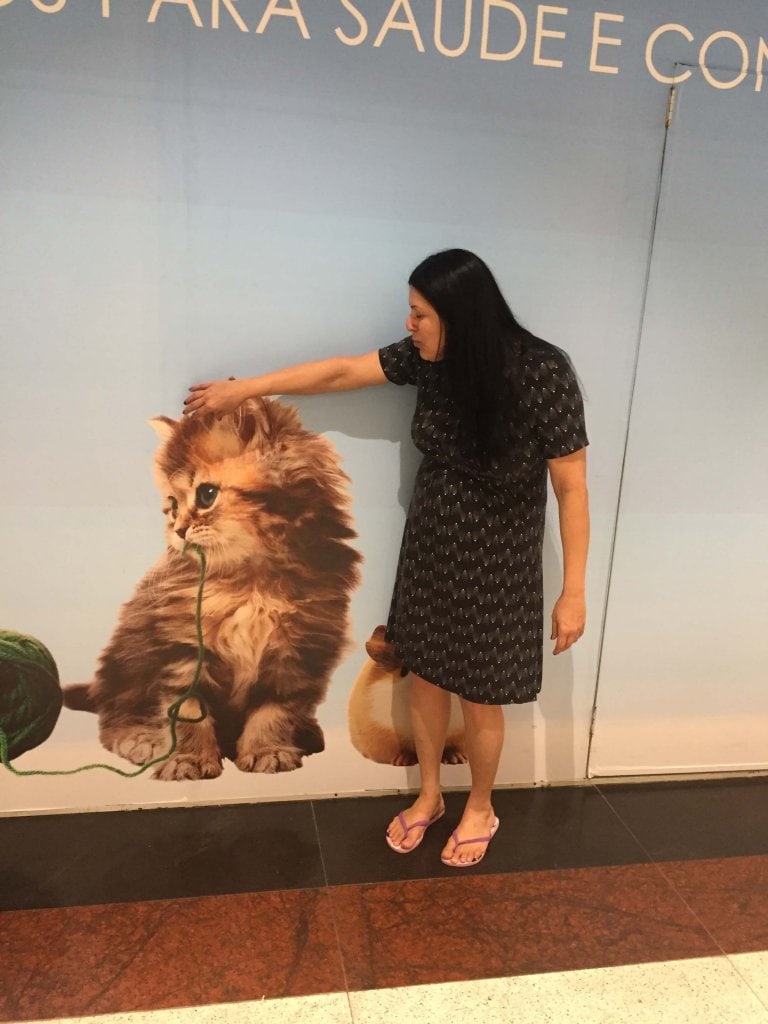 I like this one, but he is too big to carry…

My name is Paula, and SewGoth is my sewing blog. It is my account of how I bring my love of the goth aesthetics into my lifestyle. I love lace blouses, corsets, and knee-high boots, but I also love to feel comfortable. I am working to bring goth and comfort together to create a wardrobe that is uniquely mine.

This website uses cookies to improve your experience while you navigate through the website. Out of these, the cookies that are categorized as necessary are stored on your browser as they are essential for the working of basic functionalities of the website. We also use third-party cookies that help us analyze and understand how you use this website. These cookies will be stored in your browser only with your consent. You also have the option to opt-out of these cookies. But opting out of some of these cookies may affect your browsing experience.
Necessary Always Enabled
Necessary cookies are absolutely essential for the website to function properly. These cookies ensure basic functionalities and security features of the website, anonymously.
Functional
Functional cookies help to perform certain functionalities like sharing the content of the website on social media platforms, collect feedbacks, and other third-party features.
Performance
Performance cookies are used to understand and analyze the key performance indexes of the website which helps in delivering a better user experience for the visitors.
Analytics
Analytical cookies are used to understand how visitors interact with the website. These cookies help provide information on metrics the number of visitors, bounce rate, traffic source, etc.
Advertisement
Advertisement cookies are used to provide visitors with relevant ads and marketing campaigns. These cookies track visitors across websites and collect information to provide customized ads.
Others
Other uncategorized cookies are those that are being analyzed and have not been classified into a category as yet.
Save & Accept
Powered by